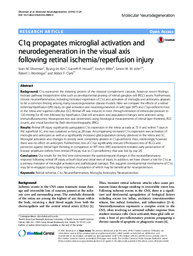 BACKGROUND: C1q represents the initiating protein of the classical complement cascade, however recent findings indicate pathway independent roles such as developmental pruning of retinal ganglion cell (RGC) axons. Furthermore, chronic neuroinflammation, including increased expression of C1q and activation of microglia and astrocytes, appears to be a common finding among many neurodegenerative disease models. Here we compare the effects of a retinal ischemia/reperfusion (I/R) injury on glial activation and neurodegeneration in wild type (WT) and C1qa-deficient mice in the retina and superior colliculus (SC). Retinal I/R was induced in mice through elevation of intraocular pressure to 120 mmHg for 60 min followed by reperfusion. Glial cell activation and population changes were assessed using immunofluorescence. Neuroprotection was determined using histological measurements of retinal layer thickness, RGC counts, and visual function by flash electroretinography (ERG). RESULTS: Retinal I/R injury significantly upregulated C1q expression in the retina as early as 72 h and within 7 days in the superficial SC, and was sustained as long as 28 days. Accompanying increased C1q expression was activation of microglia and astrocytes as well as a significantly increased glial population density observed in the retina and SC. Microglial activation and changes in density were completely ablated in C1qa-deficient mice, interestingly however there was no effect on astrocytes. Furthermore, loss of C1qa significantly rescued I/R-induced loss of RGCs and protected against retinal layer thinning in comparison to WT mice. ERG assessment revealed early preservation of b-wave amplitude deficits from retinal I/R injury due to C1qa-deficiency that was lost by day 28. CONCLUSIONS: Our results for the first time demonstrate the spatiotemporal changes in the neuroinflammatory response following retinal I/R injury at both local and distal sites of injury. In addition, we have shown a role for C1q as a primary mediator of microglial activation and pathological damage. This suggests developmental mechanisms of C1q may be re-engaged during injury response, modulation of which may be beneficial for neuroprotection.

Except where otherwise noted, this item's license is described as Attribution 4.0 International (CC BY 4.0)