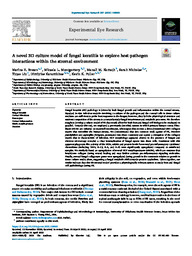 Fungal keratitis (FK) pathology is driven by both fungal growth and inflammation within the corneal stroma. Standard in vitro infection models involving co-culture of the pathogen and the corneal cells in tissue culture medium are sufficient to probe host responses to the fungus; however, they lack the physiological structure and nutrient composition of the stroma to accurately study fungal invasiveness and metabolic processes. We therefore sought to develop a culture model of FK that would allow for both host and fungal cell biology to be evaluated in parallel. Towards this end, we employed a previously described system in which primary human cornea fibroblasts (HCFs) are cultured on transwell membranes, whereupon they secrete a three-dimensional (3D) collagen matrix that resembles the human stroma. We demonstrated that two common mold agents of FK, Fusarium petroliphilum and Aspergillus fumigatus, penetrated into these constructs and caused a disruption of the collagen matrix that is characteristic of infection. HCF morphology appeared altered in the presence of fungus and electron microscopy revealed a clear internalization of fungal spores into these cells. Consistent with this apparent phagocyte-like activity of the HCFs, mRNA and protein levels for several pro-inflammatory cytokines/chemokines (including TNFalpha, IL-1beta, IL-6, and IL-8) were significantly upregulated compared to uninfected samples. We similarly found an upregulation of several HCF metalloproteases (MMPs), which are enzymes that breakdown collagen during wound healing and may further activate pro-inflammatory signaling molecules. Finally, several fungal collagenase genes were upregulated during growth in the constructs relative to growth in tissue culture media alone, suggesting a fungal metabolic shift towards protein catabolism. Taken together, our results indicate that this 3D-stromal model provides a physiologically relevant system to study host and fungal cell pathobiology during FK.

Except where otherwise noted, this item's license is described as Attribution-NonCommercial-NoDerivatives 4.0 International (CC BY-NC-ND 4.0)