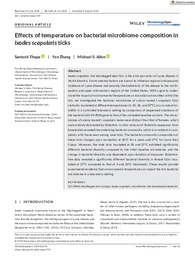 Ixodes scapularis, the blacklegged deer tick, is the principal vector of Lyme disease in North America. Environmental factors are known to influence regional and seasonal incidence of Lyme disease and possibly the endemicity of the disease to the northeastern and upper mid-western regions of the United States. With a goal to understand the impact of environmental temperature on microbial communities within the tick, we investigated the bacterial microbiome of colony-reared I. scapularis ticks statically incubated at different temperatures (4, 20, 30, and 37°C) at a constant humidity in a controlled laboratory setting by comparison of sequenced amplicons of the bacterial 16S V4 rRNA gene to that of the untreated baseline controls. The microbiomes of colony-reared I. scapularis males were distinct than that of females, which were entirely dominated by Rickettsia. In silico removal of Rickettsia sequences from female data revealed the underlying bacterial community, which is consistent in complexity with those seen among male ticks. The bacterial community composition of these ticks changes upon incubation at 30°C for a week and 37°C for more than 5 days. Moreover, the male ticks incubated at 30 and 37°C exhibited significantly different bacterial diversity compared to the initial baseline microbiome, and the change in bacterial diversity was dependent upon duration of exposure. Rickettsia-free data revealed a significantly different bacterial diversity in female ticks incubated at 37°C compared to that of 4 and 20°C treatments. These results provide experimental evidence that environmental temperature can impact the tick bacterial microbiome in a laboratory setting.

Except where otherwise noted, this item's license is described as Attribution 4.0 International (CC BY 4.0)